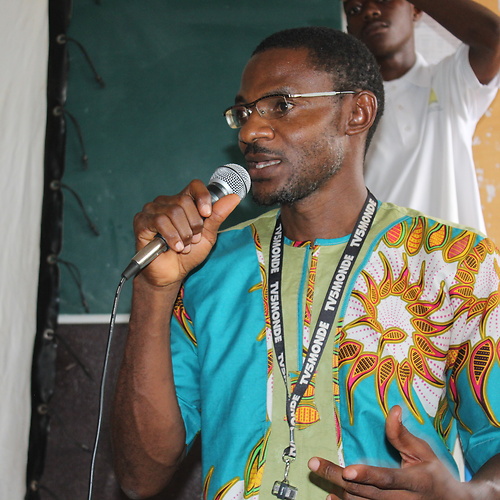 Mbog-Len Mapout Félix was born in Libolingock in the Littoral region of Cameroon in 1982. He contracted the poliovirus at the age of 2 and permanently lost the motor skills of his legs. After 6 years of motor rehabilitation care, he started to move around with 2 crutches, then began his studies and despite difficulties in moving around, he continued his university studies in Yaoundé. He met an elder, the late Bell Simon Pierre, who introduced him to documentary filmmaking. Thanks to him, he made his first documentary and obtained a grant from the association AFRICADOC and the French embassy for studies of master 2 documentary creation at the University Gaston Berger (UGB) of Senegal in 2011.
From his first documentary HEMLE (HOPE), he became a committed documentary filmmaker, author today of more than 6 documentary films. In his first films, he uses cinema as a tool to promote people living with disabilities by directing himself. In 2014, he directed his first almost feature film, THE MYTH OF MAPOUT, a documentary of memory of the exactions of colonialism in his family and in Cameroon.

THE MYTH OF MAPOUT - 2014
(Grand prix Eden for documentaries at the Festival Lumières d'Afrique, 2016 (Besançon))